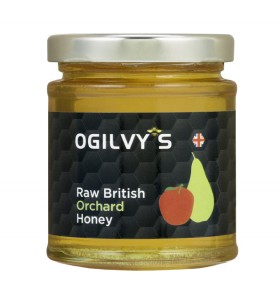 Quintessentially British honey from the apple and pear orchards in Kent. The taste and aroma is influenced by the nectar source giving this honey a deliciously sweet and floral flavour. Bees only fly in a five-mile radius from the hive so this honey is uniquely regional.

A versatile honey and natural sweetener, Orchard Honey makes a great companion to any breakfast table spread generously on your morning toast or drizzled over muesli and yoghurt.

Perfect to use as a natural sweetener with tea and coffee and for cooking and baking too.

There are 7 raw British honeys in the collection and each one has distinctive characteristics and a different flavour, influenced by the natural variety of trees and plants found in the British countryside.

20% off purchases in March