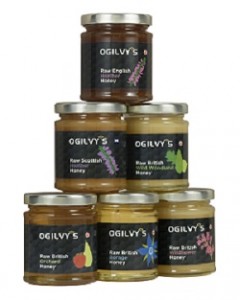 Ogilvy’s Honey will be exhibiting our full range of British Raw honeys and world honeys at the Speciality & Fine Food Fair, which will be held at London Olympia from 6-8 September 2015.

The Speciality & Fine Food Fair is the premier trade event for the speciality and artisan food industry and attracts a range of visitors ranging from independent retailers to chefs, wholesalers, importers and distributors, and attracted over 12,000 visitors last year.

Sales of honey have been increasing thanks in part to increased awareness by consumers of the variety of flavours and tastes, and also increased interest in finding alternatives to refined sugar.

Ogilvy’s Honey offers a wide variety of runny and set honeys that cater to all tastes.For those wanting a stronger taste, our two heather honeys from the British range make a great option or then for a milder taste the Raw Borage Honey has a deliciously mild taste.

Ogilvy’s range of world honeys has won a number of Great Taste Awards including a Gold three star award for our Balkan Lime honey. Come and visit our stand and find out what great honey tastes like!