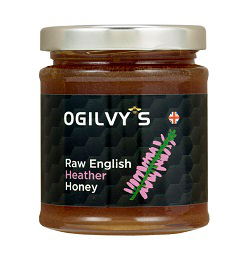 The British Isles produces an amazing variety of runny and set honeys from all types of flowers and trees but heather honey stands out above them all thanks to its distinct taste, colour and texture that combine to create an unforgettable honey.

What is Heather Honey?

Heather honey is a single flower honey (monofloral honey) produced by bees foraging from heather plants or Calluna vulgaris to give it its Latin name. Another common name for the heather plant is ling heather, and it flowers from late July to as late in the year as November depending on the variety and where it is located.

Why is Heather Honey Special?

Heather honey has a distinctive taste that is strongly aromatic but sweet at the same time and has a strong lingering aftertaste. The colour of heather honey is also particularly beautiful and can from a reddish brown to golden dark amber.

Like manuka honey, heather honey is thixotropic, which means that it has a jelly like or thick consistency unless it is stirred or ‘agitated’ when it becomes runnier before it returns to its thicker state. For this reason, heather honey (and manuka honey) cannot be spun using an extractor in the same way as other honey and is pressed out or is put into a honey loosener (also called a perforextractor) to agitate the honey so it can be spun as normal.

Where is Heather Honey Produced?

Scotland is famous for its heather honey, but it is not the only area in the British Isles where it is produced. There are some delicious heather honeys that are produced in Yorkshire, Derbyshire as well as in Wales and the southwest of the country.

Over recent years, there has been a resurgence in interest in the healing properties of honey, which is not a new phenomenon as records of honey being used to treat infections date back as far in time as ancient Egypt.

In 2013, a research team from the University of Glasgow tested 29 different honeys and found that heather honey sourced from the Inverness area killed MRSA bacteria as well as three other types of bacteria. There is still a lot of research to be done but this could mean that heather honey is as exceptional as manuka when it comes to its antibacterial potential.

For anyone interested in high quality honey that has a fantastic taste then try one of our heather honeys today.