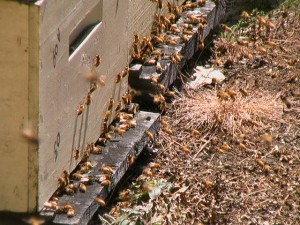 It’s time for some good news about the honey bee – at least in the UK. Without them there would be no delicious raw honey to spread on your breakfast toast or to drizzle over a bowl of Greek yoghurt, not to mention the billions of pounds worth of crop pollination work they do every year.

The colonies are registered on BeeBase, which is the website of the UK’s National Bee Unit. The unit has a variety of functions including protecting honeybees, inspecting bee health, advice, training as well as R&D.

Alongside this increase in the number of registered bee colonies has been an increasing awareness of the importance of bees to the economy as a whole and in particular the work they do as pollinators.

In 2014, the Government launched a National Pollinator Strategy or Bee Action Plan, which is a 10 year strategy containing a variety of measure aimed at helping increase the habitat and food sources for bees and other pollinators.

Friends of the Earth have also launched the Bee Cause campaign to support the Bee Action Plan, and this includes a great Bee Saver Kit containing wildflower seeds, a bee guide, Bee ID and garden planner.

Part of the reason for the increased awareness about honey bees is also thanks to increasing public appetite for raw honey and the rise of urban beekeeping, with the number of urban beekeepers tripling in London since 2008, according to two biologists at the University of Sussex.

Ogilvy’s is responding to the demand for delicious British raw honey and during the course of 2015 will be unveiling the lid on its new range of raw British honeys, which will include heather honey and borage honey. So keep checking the website to see when these scrumptious new honeys become available.