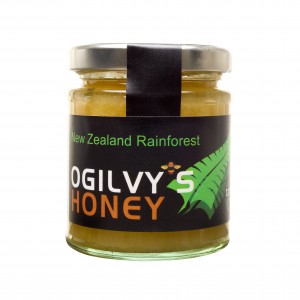 It is unlikely that anyone who has even a passing interest in honey has not heard about the miraculous benefits and properties of New Zealand’s most famous honey export: Manuka honey.

This is of course not surprising as it is a truly remarkable honey and so completely understandable that singing stars, celebrities and top level athletes as well as the general public are falling over themselves to get their hands on a jar of it.

However, for lovers of interesting raw honey it is worth noting that New Zealand is blessed with a multitude of unique and special varieties. Fortunately for you, the Honey Hunter has been able to track one or two of them down and Ogilvys’s range of superstar honeys includes two Great Taste award winning New Zealand honeys: Rewarewa and New Zealand Rainforest.

Why is honey from New Zealand special?

The very name New Zealand conjures up an image of an exotic land far, far away and it is in fact the country’s location at the end of the world that is reason for its rich variety of delicious honeys because this very isolation means many different types of plants have evolved that are unique to the country. So the bees that feed off these plants also produce types of honey that are only found in New Zealand – a perfect storm for the creation of some of the most amazing honey you will ever taste.

While manuka honey hogs all the headlines, those who like a monofloral honey with an intensely delicious flavour will not be disappointed with Ogilvy’s Rewarewa honey. In fact, Rewarewa can be confused with manuka honey although it has a distinctly red tinge to it and its flavour is more like caramel-toffee than the sometimes earthy taste of herbs of manuka.

The Rewarewa tree is the Maori name for the tree, which is these days less commonly known as the New Zealand Honeysuckle tree. The tree produces an abundance of nectar and the resulting honey is widely known for its high level of antioxidants, which have been researched at the University of Waikato.

It is not just the abundance of flowers and trees in New Zealand that make the country special, but also the lack of pollution and untouched natural environment of many of its forest lands, especially in the South Island with its sparse population and remote location. Ogilvy’s New Zealand Rainforest honey is mild, buttery, aromatic honey that melts in your mouth and is sourced from the pristine wilderness of the South Island.

New Zealand is also Middle Earth and so it should not be surprising to learn that honey cakes make a cameo in both the Hobbit and the Lord of the Rings, although it is unclear if Ogilvy’s Rewarewa or New Zealand Rainforest Honey were the specific varieties used. One thing is for certain though – New Zealand honeys are out of this world. Give them a try and let your taste buds take you on an unforgettable journey.