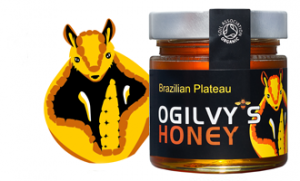 Join the football fever now with Ogilvy’s and win a taste of Brazil!

To enter logon to https://www.ogilvys.com/win/

Love the jar and the label – how stylish and looks a million dollars – it is obvious that it (Himalayan Highlands) is a quality product. The taste is very smooth, with a beautiful aroma but delicate and intense with hints of flowers. I will try cooking with it, but seems almost too good to cook with.