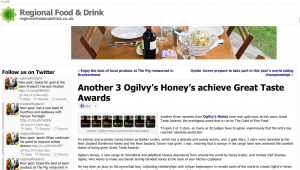 “Another three varieties from Ogilvy’s Honey have won gold stars at this years Great Taste Awards, the prestigious event that is run by The Guild of Fine Food.

To gain 2 or 3 stars, as many as 20 judges have to agree unanimously that the entry has reached ‘absolute perfection’.

An intense and aromatic honey known as Balkan Linden, which has a delicate and woody aroma, won 3 gold stars, 2 stars were awarded to the New Zealand Rainforest honey and the New Zealand Tawari was given 1 star, meaning that 6 honeys in the range have now achieved the coveted status of being given Great Taste Awards.”

You can read the full article here.